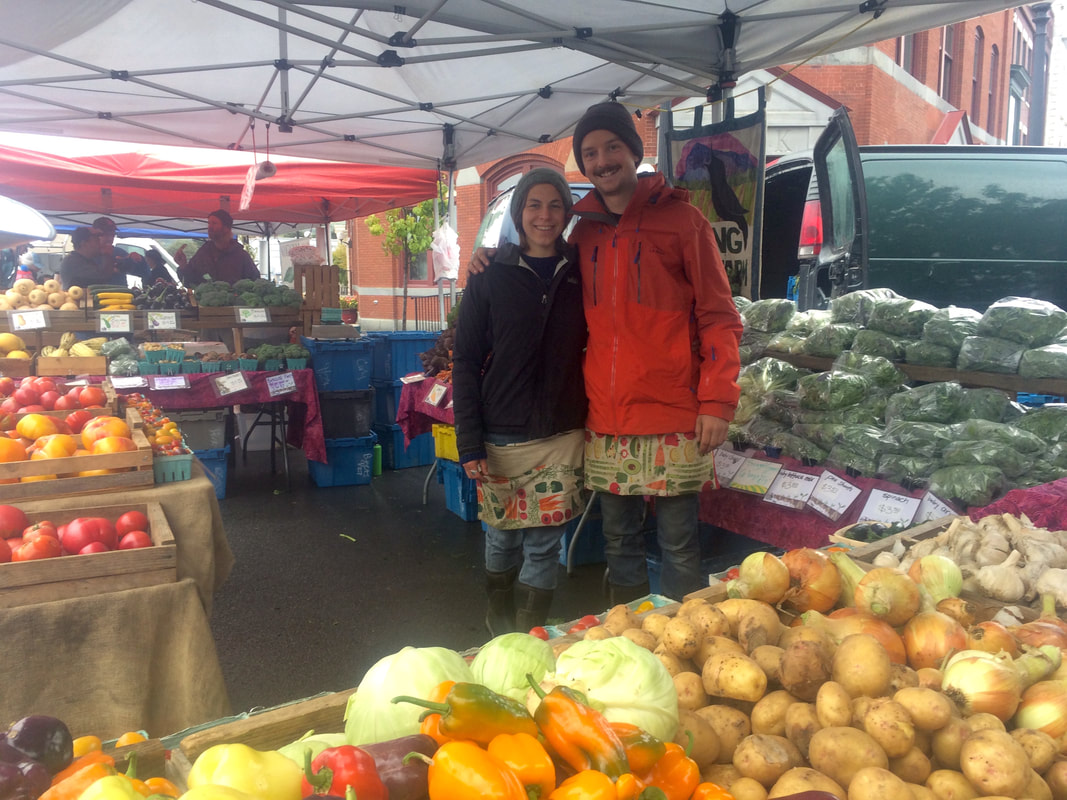 Joe grew up in Canton, New York where his parents had a small hobby farm with a large garden, goats, chickens, and pigs. Kate grew up in Troy, Michigan, surrounded by much of her extended family, and has always felt a strong pull to settle in Michigan and build a life here. They met working at the New Orleans Food Co-op in 2014, by which point Kate had already spent a season farming in Vermont and knew she had to continue working and learning at farms. Kate and Joe spent the following summer at neighboring farms in Southeastern Michigan- Kate at Hand Sown Farm in Manchester and Joe at Frog Holler Farm in Brooklyn. During his first season, Joe fell in love with farming and somehow convinced Kate that they would someday start their own farm.

After spending 2015 on separate farms, they sought out apprenticeships together for the 2016 season, and found Evening Song Farm in Cuttingsville, Vermont. Over a year and a half at ESF they honed their farming skills through all four seasons, taking on responsibilities at each level of the business, and began seriously planning for their future farm. Kara and Ryan Fitzbeauchamp, ESF’s owners, provided invaluable opportunities, guidance, and mentorship which continues to this day, helping Kate and Joe develop their farming skills and ethic, and setting a clear example of how rewarding serving the community through farming can be.

Mighty Soil Farm will begin with a half acre of vegetables in the first year and eventually grow to include a couple acres of vegetables, livestock, and an orchard. Kate and Joe consider healthy soil to be the main input of a sustainable farm operation and have decided not to use a four wheel tractor to avoid soil compaction and destruction of soil organisms. This means intensive and efficient management to glean large amounts of produce from a small amount of land. Mighty Soil will utilize crop rotations, compost, natural mulch, and fungal connections to give plants the best habitat to grow strong and resist pest and disease attacks. In this way, Mighty Soil will avoid the use of even organic pesticides and herbicides which can be detrimental to bees, frogs, and beneficial insects.

Returning to Michigan in 2018 and starting Mighty Soil Farm through MSU’s incubator program in Chatham represents a jumping off point for Kate and Joe that they’ve been planning for and dreaming of for years. and they couldn’t be more excited to get their hands dirty and root themselves in the Upper Peninsula.
Follow Mighty Soil Farm on Facebook and Instagram