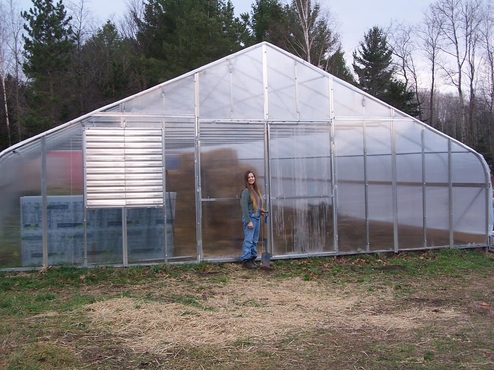 Treasa has always been attracted to gardens and farming since she was very young.  Her Grandma Daisy would haul her in a wheelbarrow to her garden as a toddler.  Treasa grew up on a farm south of Chatham.   She started working in the dairy barn at the MSU Experiment Station in 1973.  Later, she married a farmer from Trenary, who was formerly employed  there. They dairy farmed,  ran an 85-cow beef herd, 350 ewe sheep flock, and 2000 tap maple syrup operation over the years.  Farm tours and field days were held.  Lamb market prices were terribly poor, so in 1996, Treasa wanted to go back to dairy farming, so they gradually developed a 60-cow herd of Registered Jerseys.  Her beloved Jerseys were rotationally grazed on pasture six months of the year and bred to all freshen in a two-month calving window.   All cows and calves had a name.  In 2002, juustoa was being made in a licensed, small cheese plant attached to the milk house.   Moving on, Treasa worked for six years in housekeeping and the kitchen at a local hospital, while struggling to build a farm out of nothing.  She has been a vendor at two farmer's markets since 2010, and also sells a small quantity to the Marquette Food Co-op.  Treasa has been in the Michigan Farmers Market Association's Certificate Program, and is the Market Manager for the Munising Farmers' and Artisans' Market.  She has served two years on the MIFMA Board of Directors. She was introduced to seed saving as a child from her grandma, and still has a few family heirlooms.  Last year, Treasa became an MSU Master Gardener Volunteer Program Trainee.  She will be seeking projects in which to use the required 40 hours of community education volunteer work this year.  Her small farm near AuTrain is Certified Naturally Grown and MAEAP Certified.   She has participated in the USDA GAP Program.   She has two 30' by 72' hoophouses, one from the MIFMA Hoophouses for Health Program.   Transplants are grown in a 17' by 24' heated greenhouse.  Treasa keeps honeybees and a few chickens.   She practices biodynamics, companion planting, planting for beneficials and permaculture.   She is grateful for the opportunity to gain additional production space, and to learn new ideas to incorporate on her present small farm.  Treasa has two children and two grandchildren.   She is married to John Sowa.
Treasa can be reached at:  hortiholictreasa@yahoo.com